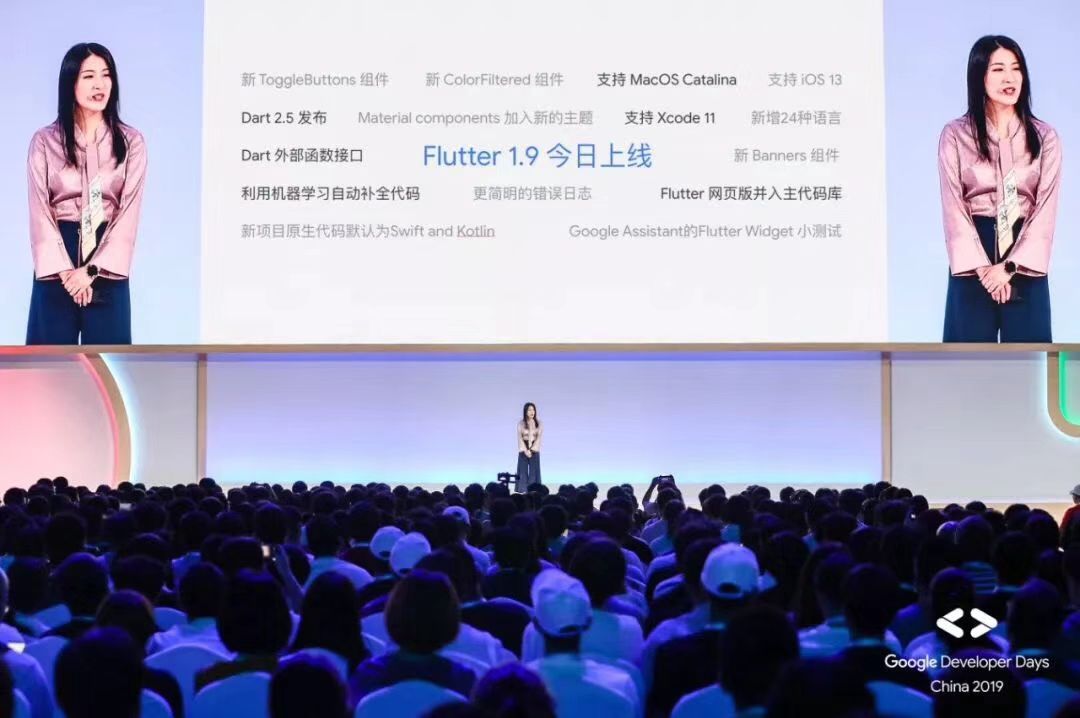 Posted by Chris Sells, PM for the Flutter developer experience

This week is a big one for Flutter! Today, at Google Developer Days, our flagship conference for Chinese developers, we used the keynote to announce our latest stable release: Flutter 1.9. This release is our biggest update yet with more than 1,500 PRs from more than 100 contributors. The new features and updates span a wide range, from support for macOS Catalina and iOS 13 to improved tooling support, as well as new Dart language features and new Material widgets.

At the keynote, we also announced a major milestone for Flutterâ€™s web support, with the successful integration of Flutterâ€™s web support into the main Flutter repository, allowing developers to write for mobile, desktop and web with the same codebase. And we showcased Tencent, one of the largest worldwide internet brands, who are using Flutter in a growing number of their mobile apps.

Letâ€™s take a deeper look at this weekâ€™s news, starting with whatâ€™s new in Flutter 1.9.

As Apple prepares to release Catalina, the latest version of macOS, weâ€™ve worked hard to make sure that Flutter is ready for you to upgrade. Weâ€™ve updated the end-to-end tooling experience to ensure it works well on Catalina and with Xcode 11. This includes adding support for the new Xcode build system, enabling 64-bit support throughout the toolchain, and simplifying platform dependencies.

With iOS 13 on the way, weâ€™ve also been working to ensure your Flutter apps look great on the latest iPhone release. Flutter 1.9 includes an implementation of the iOS 13 draggable toolbar, with both long-press and drag-from-right, and supports vibration feedback. Work on iOS dark mode is also well underway with a number of pull requests already merged.

Finally, in the latest development builds, you can now turn on experimental support for Bitcode, which is Appleâ€™s platform-independent intermediate representation of a compiled program. Submitting your app as Bitcode allows Apple to optimize your binary in the future without resubmission, and opens the door to Flutter potentially supporting platforms like watchOS and tvOS that require Bitcode for app submission.

The Material components and features also get an upgrade in Flutter 1.9. Material is one of the worldâ€™s leading open-source design systems, providing a comprehensive, flexible set of building blocks for implementing interactive user experiences across many platforms.

In this release, we provide several new widgets including ToggleButtons (left) and ColorFiltered (right).

As shown in the image above on the right, the ColorFiltered widget allows you to recolor a tree of child widgets just like you can recolor an image using one of several different algorithms (some of which are shown in the example screenshot above). This has many uses, for example, handling color blindness accessibility issues for your users. To see this in action, check out the ColorFiltered sample.

The end-to-end developer experience depends not just on the features of Flutter but also on the underlying language itself. As part of the Flutter 1.9 release, we are also releasing Dart 2.5. Dart 2.5 includes a pre-release of Foreign Function Interface (FFI) support, providing native extensions so Dart can call directly into code written in C. It also introduces machine learning-powered code completions for the IDE. You can learn about both of these and more in the Dart 2.5 announcement.

With this release, new projects default to Swift instead of Objective-C and Kotlin instead of Java for iOS and Android projects respectively. Since many packages are written with Swift, making it the default language removes manual work for adding those packages to an app created with the default options. Swift 5 is ABI stable, and thanks to app thinning work Apple has done in recent releases, the Swift dynamic libraries no longer need to be included in the distribution package for iOS 12.2 or greater, reducing the size of Swift applications compared to previous releases.

And as Kotlin is now the default language for new projects in Android Studio, it seems natural to make the language switch for Android also. These options are now the default for both the flutter CLI tool and the IntelliJ/Android Studio and VS Code plugins for Flutter, but you can always switch back to Objective-C or Java if you prefer. 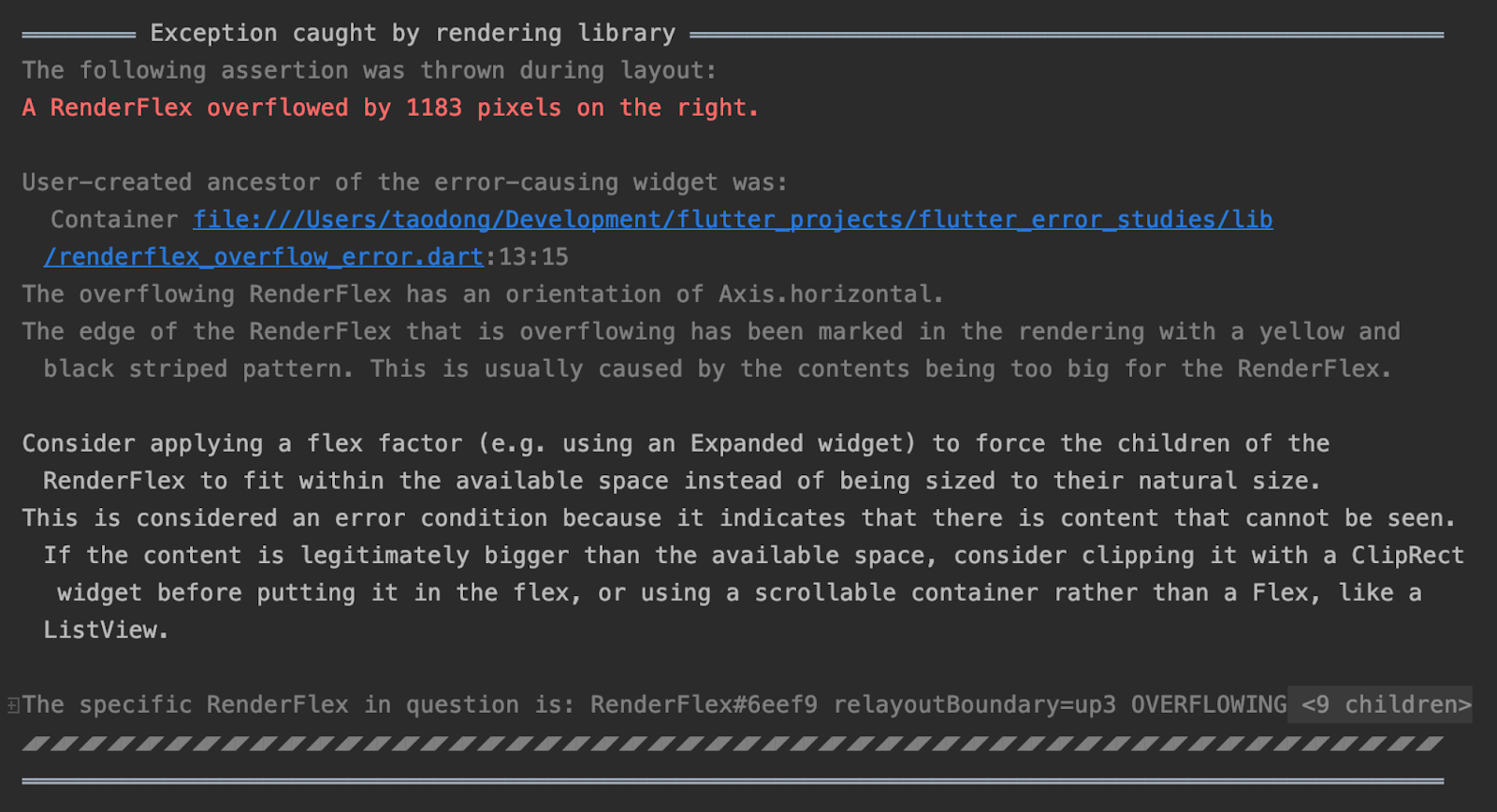 The Flutter User Experience team has led the charge on this project; you can read the details in a separate blog post covering the work on structured error display. Weâ€™ve just started to apply these new patterns, and you can expect more error messages to take advantage of this work in coming releases.

Flutter on the web

And finally, we are very happy to announce that the flutter_web repository is deprecated now that web support has been merged into the main flutter repository! What this means is that if you have the latest builds of Flutter from the master or dev channel, you can target the web with the latest experimental version of Flutter by running flutter run -d chrome.

When you create a project, Flutter now creates a web runner via a minimal web/index.html file that bootstraps your web-compiled Flutter code. With that file in place, you can use the Flutter CLI tool or the IDE plugins to edit and run Flutter apps on the web.

Above is a screenshot of VS Code with web support enabled for Flutter. Notice the web/index.html file, along with the dropdown list allowing you to choose Chrome as your target development device. Support for web output with Flutter is still at an early phase, but this release represents a major step forward towards enabling production support for web development with Flutter.

At the end of July, we announced an early adopter program designed to get a group of select Flutter applications deployed to production on the web over the next six to twelve months. We received over 1,000 submissions to the program. Unfortunately, we donâ€™t have the capacity to support everyone who applied to join the program, but now web support is merged into the Flutter framework, weâ€™re excited that everyone can now experiment with this capability. 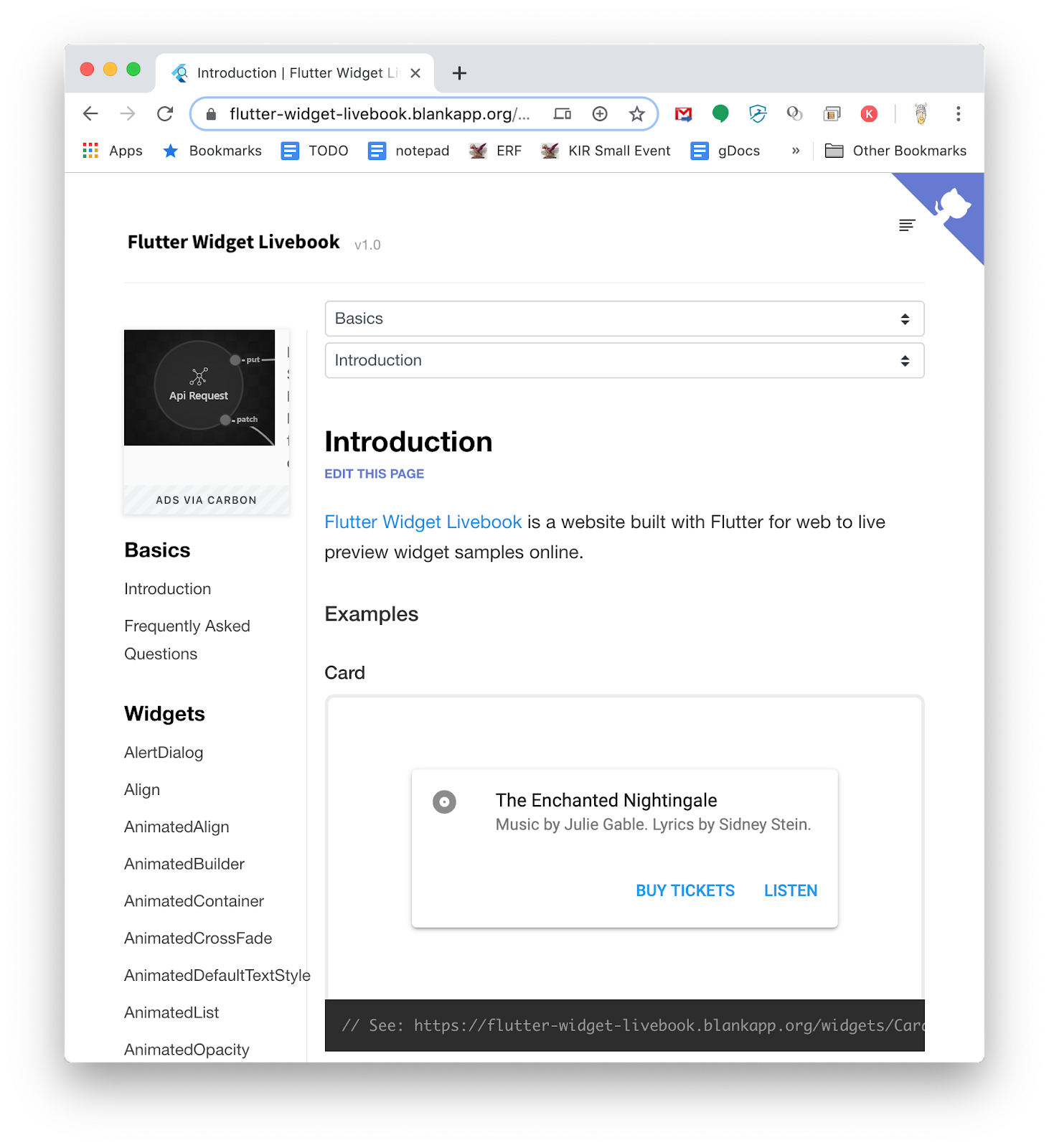 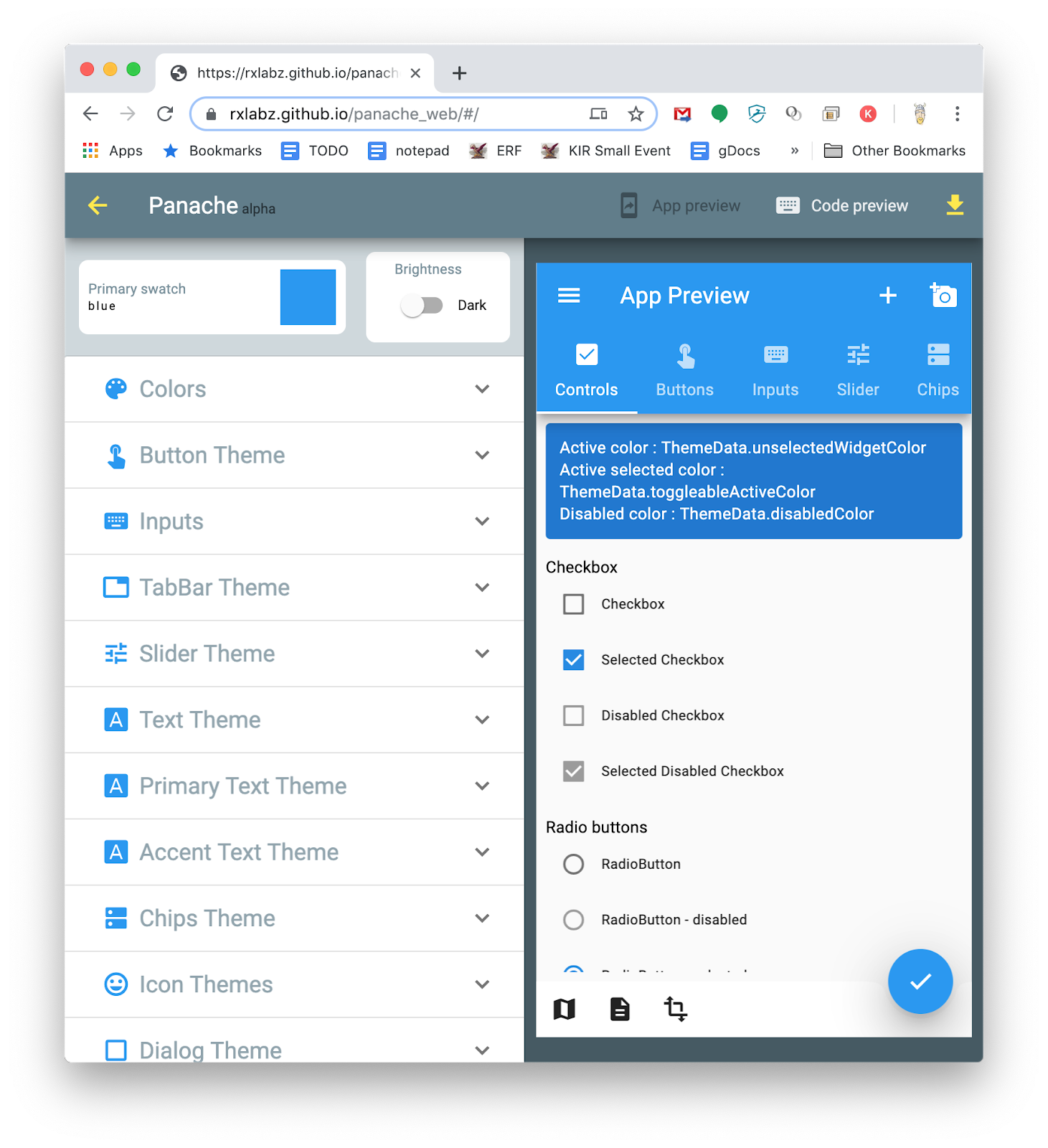 Flutter Widget Livebook (left) is built with Flutter for web and shows Flutter widgets running live in your browser. Panache (right) is a tool for creating themes for Flutter which you can then download and drop directly into your code.

Please give this updated experimental support for Flutter on the web a try and let us know if you have any feedback.

Weâ€™re thrilled to see continuing fast growth and adoption of for Flutter. Here at Google, hundreds of developers are working on more than twenty projects using Flutter, including some that are released and many that are still in development. At GDD China this week, we highlighted how Tencent, one of the largest internet brands, is using Flutter pervasively for a wide variety of projects:

Switching gears to something just for fun, if you have Google Assistant on your phone or one of the Google Nest Hub devices, try saying â€œOK Google. Talk to Flutter Widget Quiz.â€� We loved seeing this community-powered quiz that tests your knowledge of Flutter.

We love the support weâ€™ve received from the developer community, whether in the form of blogs and articles, published apps or issues and code contributions. For more details on upgrading to Flutter 1.9, including details on how to fix any breaking changes that you might experience as you migrate your code, check out the detailed Flutter 1.9 release notes.

Thereâ€™s a ton for you to try with this release, from trying out the new dart:ffi or ML-based code completion features to experimenting with Flutter for web; from the new support for Catalina and iOS 13 and new ToggleButtons and ColorFilter widgets to testing yourself on your Flutter widget knowledge.

Now that youâ€™ve got Flutter 1.9 in your hands, weâ€™re excited to see what you will build with it!